Balenciaga has apparently, stolen Gucci’s crown to become the hottest brand in fashion. Results accumulated from the latest data analysed by BOF in partnership with search platform Lyst, which tracks 4.5 million data points per hour from over 65 million annual consumers, five million products and 12,000 brands confirm this undisputedly.

According to BOF though, Gucci is not going anywhere soon;

“The Demna Gvasalia-designed brand climbed two places from a previous 3rd position, to top the hottest brand ranking in the third quarter of 2017. Gucci dropped one place, coming in second this quarter, but continues to excel as the most consistent performer in the hottest brand ranking to date this year. Between July and September, the label launched Gucci Décor — an eclectic line of home furnishings and treatments — and announced its collaboration with Dapper Dan, driving brand searches across the e-commerce sites Lyst aggregates.”

So a lucky break for Balenciaga? I don’t think so, the Balenciaga line, especially the boots has been one of the most rocked trends on fashion scenes this year, and it doesn’t take a genius to recognize that they definitely out in werk.

But the real success story this quarter is the unbelievable and incredible rise of Virgil Abloh’s Off-White, which jumped 31 places to become the third-hottest fashion brand in the world in Q3, knocking Kanye West’s Yeezy — which ranked number two last quarter — out of the top 10. I mean can you wrap your head around those numbers, from 36th to 3rd, even Kanye didn’t pull that.

But this comes as no surprise since we witnessed the growth of street wear’s wider acceptance by stylish millenials, Off-White’s presence in the top three underscores the rise of street wear brands within the realms of high-end fashion. According to consultancy Bain & Company, as Gen-Z consumers’ share of wallet grows, street wear has helped boost global sales of personal luxury goods by 5 percent to an estimated total of €263 billion ($309 billion) in 2017. Plus it helps when Rihanna loves your products.

However according to the reports gotten from the LYST results, Off-White’s biggest driver of engagement by far was Abloh’s collaboration with Nike, which saw him re-imagine 10 models from its archive including the Air Jordan 1, Air Max 90, Blazer, Hyper dunk and Air Force 1. Over the period from July to September, page views of Off-White products across Lyst’s partner sites increased by 184 percent, while searches increased by 63 percent quarter on quarter. African designers, get in here and take a cue!

Others on the top 10  include; 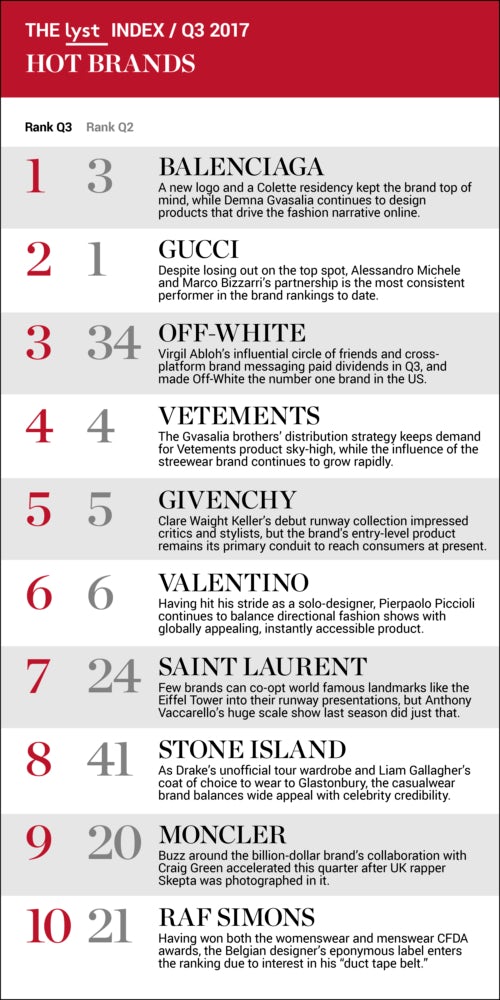 This site uses Akismet to reduce spam. Learn how your comment data is processed.

SV Roundup – 7 Most Alluring Beauty Looks On Magazine Covers In This Month Of March.